skip to main | skip to sidebar

The late, great radio feature Record Bin Roulette has been off the air for awhile, but stalwart producer/hosts John Kessler and John Maynard are still digging in the vinyl trenches and turning up analog artifacts. In this piece (produced by me) that premieres Monday, May 5 on Seattle PBS affiliate KCTS 9, we follow the two as they visit the city's flagship Goodwill--the same place where Macklemore's "Thrift Shop" video was filmed.

Posted by Feliks Banel, Editor at 7:19 AM No comments:


This piece about the amazing SPARK Museum in Bellingham, WA will premiere on PBS affiliate KCTS 9 in Seattle on Monday, April 28 at 10 pm. Special thanks to John Jenkins and Tana Granack for allowing us to tour their fascinating collection and witness their exciting live scientific demonstrations.
Posted by Feliks Banel, Editor at 3:34 PM No comments:


It was my distinct pleasure to work with Steve Scher of Seattle's NPR affiliate KUOW-FM to produce this "essay" for the KCTS arts and culture program PIE.

The vision, voice and narration is all Steve, and the piece was shot by my talented KCTS colleagues Dave Ko and Resti Bagcal, and edited by Cleve Ticeson.
Posted by Feliks Banel, Editor at 8:56 PM No comments:

Here's a profile of Stuart McLean of CBC Radio's The Vinyl Cafe, produced by me for Seattle PBS affiliate KCTS 9.
Posted by Feliks Banel, Editor at 11:15 PM No comments: 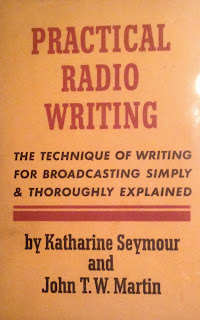 For those of us who write for (or who have written for) both television and radio, the following short chapter ('NOTE ON TELEVISION') from the 1938 book, Practical Radio Writing by Seymour & Martin, provides some interesting advice, but not so much in the way of encouragement. However, the authors' view on the ultimate peaceful (?) coexistence of radio and television is downright prescient!

With radio broadcasting no longer a novelty but an established medium of entertainment and information, the public is anticipating a newer medium which will transmit visual images to supplement sound.

The individual who wishes to write for radio’s aural audience, however, should not concern himself with television. Material written for this newest medium, which combines the techniques of writing for the stage and screen, is a complete reversal of radio technique, and a detailed analysis of television writing finds no place in a book devoted to Practical Radio Writing.

Television’s first function will be to provide entertainment which cannot be supplied by any other present medium—notably the direct telecasting of world events. Radio enables listeners to sit comfortably in their homes and hear a football or baseball game, and to know the final score the moment the spectators know it. Television can take the final step and make it possible for people to see the game in their own homes, without the assistance of an announcer who interprets the action through his eyes and words.

News events, “telecast” or “televised” from the scene of the action have been extremely successful. Such presentations, however, will be of little interest to the radio writer. The spoken portions of such programs have included only written opening announcements and extemporaneous remarks by a commentator.

Obviously the radio writer’s technique is inapplicable to television, just as it is to the stage or screen. The expert radio writer will have as much difficulty adapting his dialogue to visual presentation as the average stage dramatist finds today in adjusting himself to the demands and limitations of radio. The successful radio writer has taught himself to work strictly in terms of sound. But in the television medium the visual appeal becomes of paramount importance, because the novelty of television lies in the fact that it enables members of a home audience to see something which is being transmitted to them from outside their homes.

Many of the successful television dramas which have been transmitted to date have stressed the visual appeal. The scripts have consisted mostly of stage directions, with sounds and spoken lines being used only to emphasize the main points of the plot and to heighten the effect of climaxes. Dialogue has been of little more importance than the captions used in old-time, silent motion pictures.

The same evolution will take place in television before it becomes an important medium of entertainment. But in order to create successful scripts for this new medium, writers will be compelled to learn the advantages and drawbacks of television entertainment. As in broadcasting, the first television scripts will be produced by writers and directors who take an active part in the development of a new technique.

Undoubtedly, dramatic entertainment will play an important part in television when many technical obstacles have been surmounted, and when the practical question—“Who will pay the tremendous costs of television?”—has been answered with satisfaction. From present indications, based on the experiments made to date, the cost of providing interesting television programs, on a nation-wide basis, will be prohibitive. Whether or not advertisers will foot the bill for regular television programs is a moot question. Someone must pay—and the cost will be many times that of commercial radio programs of equal interest. Mechanically, television has graduated from the laboratory. Practically, its support presents a stupendous financial problem.

Without a doubt a solution will be found, but from all the indications the advent of television will not affect the present demand for competent radio writers. Authorities are unanimous in their belief that television will not supersede radio broadcasting in the immediate future, but will take its place beside radio, the screen and the stage as an additional medium of entertainment and information.
Posted by Feliks Banel, Editor at 10:57 PM 1 comment:

Now that the holidays have come and gone, I'm finally getting around to posting online audio of the December 13, 2013 live broadcast of Seattle Radio Theatre's production of It's A Wonderful Life from Town Hall Seattle. Our broadcast partner was KIRO Radio 97.3 FM, and we had our largest ever live audience (600+) and likely our largest radio audience, too. KIRO Radio was a fabulous partner--enthusiastically promoting the show, skillfully handling all the live broadcast engineering, and providing several talented actors.

Among the highlights this year was a four-piece orchestra, recruited and wrangled by Seattle Radio Theatre musical director Rob Jones to supplement his masterful keyboard work. The hope is that all subsequent productions will feature the newly-christened "Seattle Radio Theatre Orchestra"--after hearing what they added to the production, it'd be hard to go back!

In addition, Dave Ross' star-turn as both Clarence the Angel AND Mr. Potter was a treat, and it was great to have John Curley back playing George Bailey as he did for our inaugural live broadcast back in 2002 (it now feels to me that it was Jimmy Stewart who was doing a John Curley impersonation in the original film). Tom Tangney as George's father and Don O'Neill as Nick the Bartender rounded out the KIRO contingent.

And, of course, the dedicated and talented members of Seattle Radio Theatre delivered yet another solid performance--Tracey Conway as Mary Hatch, Jim Dever as Uncle Billy (and the bridge tender), John Maynard as the announcer, Chris Topping in several voice-bending roles, and Lee Callahan and Dolores Rogers. Curtis Takahashi delivered his usual knockout sound effects performance, and masterfully integrated an iPad for playback of a few key sounds on tape (ambient car interior, big splash). More details are included in the program, reproduced below.

Click here for complete audio of the show. There's also a short YouTube video of John Curley, Dave Ross and Tom Tangney rehearsing at KIRO a few days before the show (embedded above). 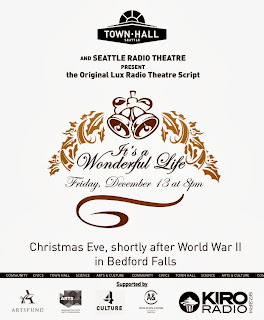 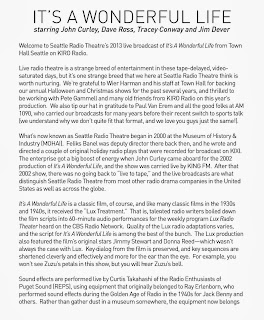 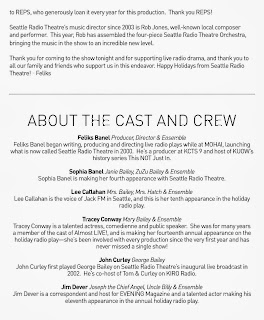 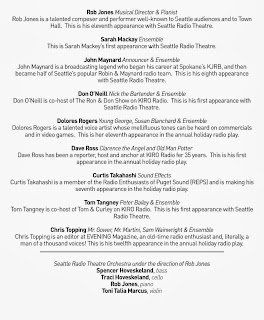 Posted by Feliks Banel, Editor at 8:39 AM No comments: 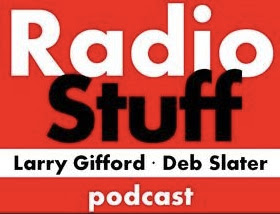 The I STILL Love Radio cubicles were all abuzz this week as editor Feliks Banel (who loves writing about himself in the third person!) appeared on the second episode of the new inside-the-industry themed Radio Stuff podcast.

Right around the 22:00 mark of this episode, hosts Larry Gifford and Deb Slater bring Feliks in for a conversation about the phenomenon that could be called "live broadcasting from the heart of the storm" (a timely topic in the wake of the Oklahoma City tornado last week). As he often does in any conversation (including those NOT about media and/or history), Feliks makes it all about Edward R. Murrow.

And speaking of historic live storm coverage, don't forget the episode of This NOT Just In all about the Pacific Northwest's infamous 1962 Columbus Day Storm.

Whatever the weather forecast is in your locality, be sure and check out Radio Stuff this week and every week. It's a great concept for a podcast, and well worth a listen.
Posted by Feliks Banel, Editor at 2:50 PM No comments:

We Still Love Radio, Too

About I STILL LOVE RADIO

Feliks Banel, Editor
Feliks Banel is a writer, producer and consultant based in Seattle. Since 2000, he has produced a series of live radio dramas now known as Seattle Radio Theatre; other local radio and TV broadcasts; as well as Emmy-nominated segments for the SEATTLE CHANNEL. Feliks produces This NOT Just In for NPR affiliate KUOW and videos for History Media History.